GONDOLA, WATERFALLS AND DAYDREAMS IN WULAI

Each week, I’m waiting impatiently for my two days off which will give me enough time to explore Taipei’s surroundings. This time, I gather Flora, a British girl who grew up in France, Nicolas, the only other French Working Holiday Visa’s holder I know, and Vita, a Taiwanese girl I met thanks to Couchsurfing. We don’t know each other pretty well yet, and a day trip is always a perfect occasion to gather up people.

We decide to go to Wulai, a lovely little aboriginal town located 30 km south of Taipei, famous for its hot springs and its stunning waterfalls. Actually, Wulai is mostly famous for its aboriginal culture, the name ‘Wulai’ coming from an Atayal phrase ‘kirofu ulai’ meaning ‘hot and poisonous’. It looks promising, right? 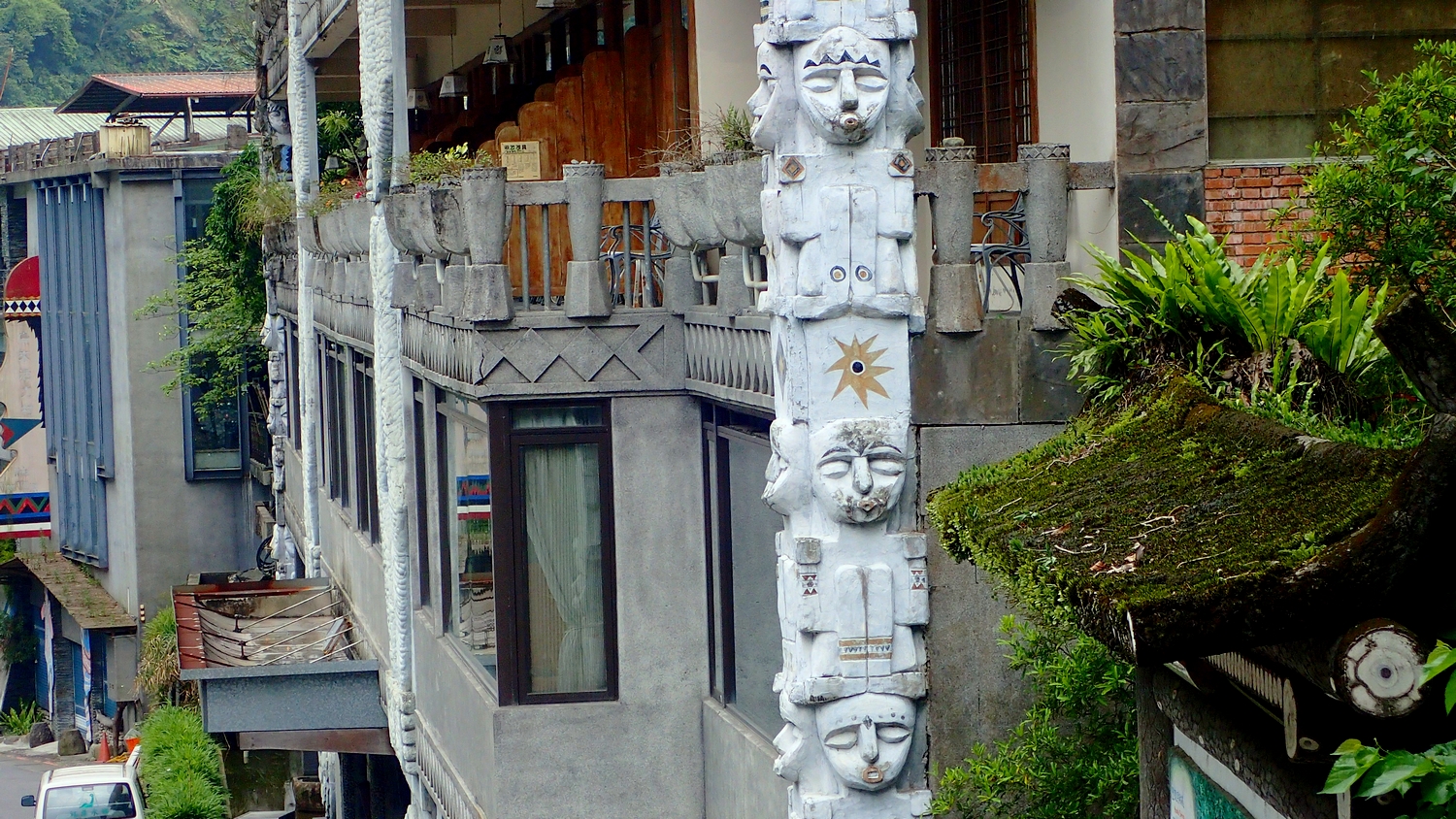 In August, then September 2015, two typhoons named Soudelor and Dujuan hit Wulai very hard, causing many landslides and flooding in Taiwan, especially in the aboriginal villages located in the mountains. Those landslides blocked access to the road, and many residents were either blocked there, either they couldn’t go back home… For weeks. Some hotels were completely destroyed by the storm, not to mention the hot springs became all muddy and impracticable. The tourism industry collapsed.

Lucky for us, we won’t see much of the damages caused by these typhoons two years ago. In fact, some locals are bathing in the natural hot pools, on the riverbank of the town. Few of them are even taking a plunge and swimming into the river. It’s crazy hot today, but whatever, I want to put my feet in. I take off my shoes and was about to put my feet in the pool when some locals started to call out on me. Vita tells me I have to clean my feet first – of course, it’s like in Japan, don’t bathe unless you’re clean. Fair enough. Water’s hot, like in Japanese Onsen, it’s relaxing but a little bit too much under the boiling sun.

TAKING THE GONDOLA ABOVE THE WATERFALLS 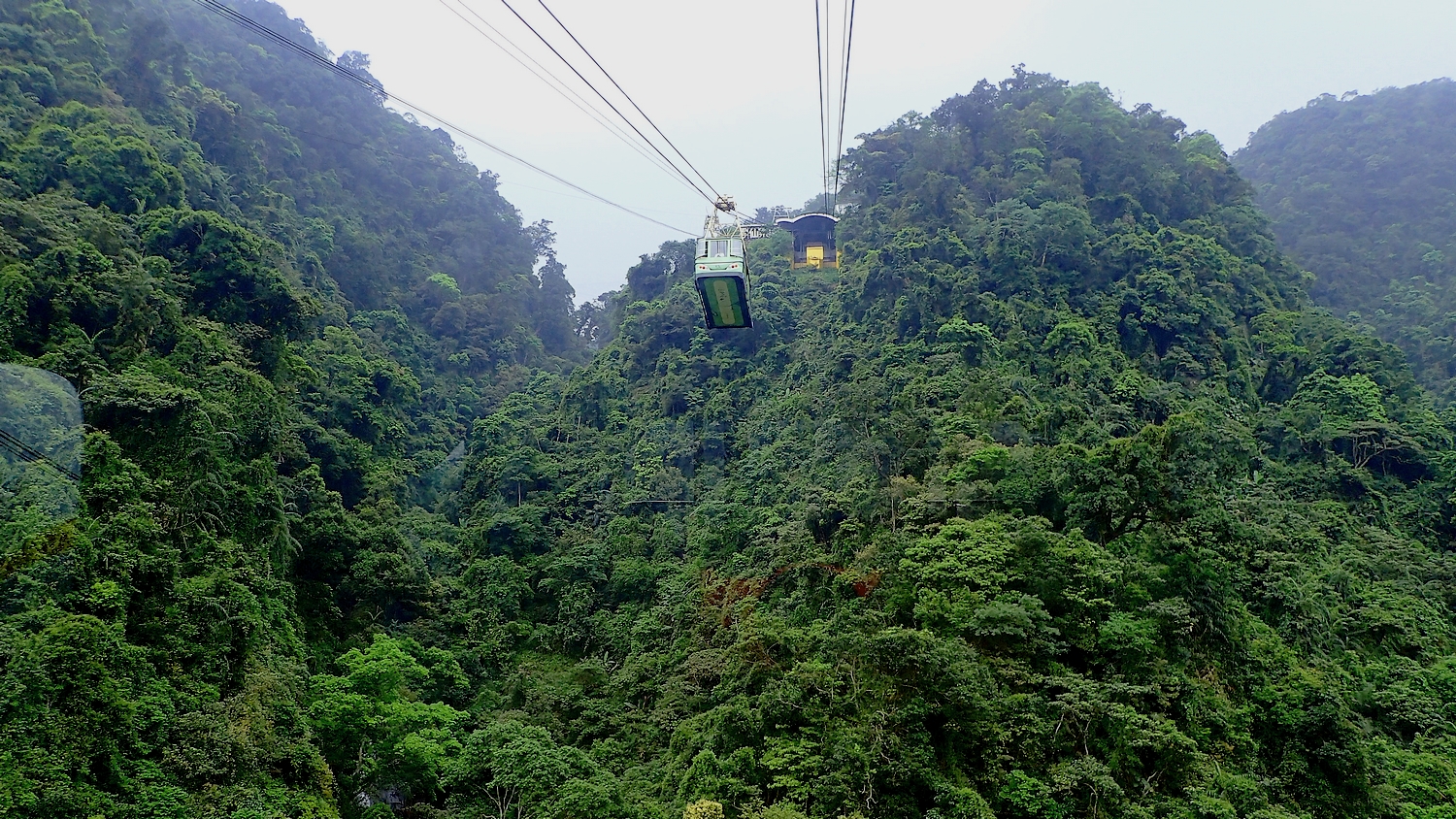 The touristic little train which was running from the city centre to the Wulai Waterfalls is not running anymore, most of the rail tracks having been destroyed by the typhoon I guess. That means, we have to walk up there. It’s really hot, I feel my whole body melting, but the view is great. We run into road workers, apparently building back the rail tracks where they once were. There are no apparent damages from the typhoon anymore, things are slowly getting rebuilt.

The Wulai Waterfalls are majestic, though. They’re the highest waterfalls in northern Taiwan and falls 80 meters into the river. What makes this waterfall so peculiar though is that you can take a gondola to the top of the waterfall by crossing the river…! The gondola ride is a bit expensive (250NT$) and quite short -10 minutes top- but it’s totally worth it… Especially for what awaits us on the other side. 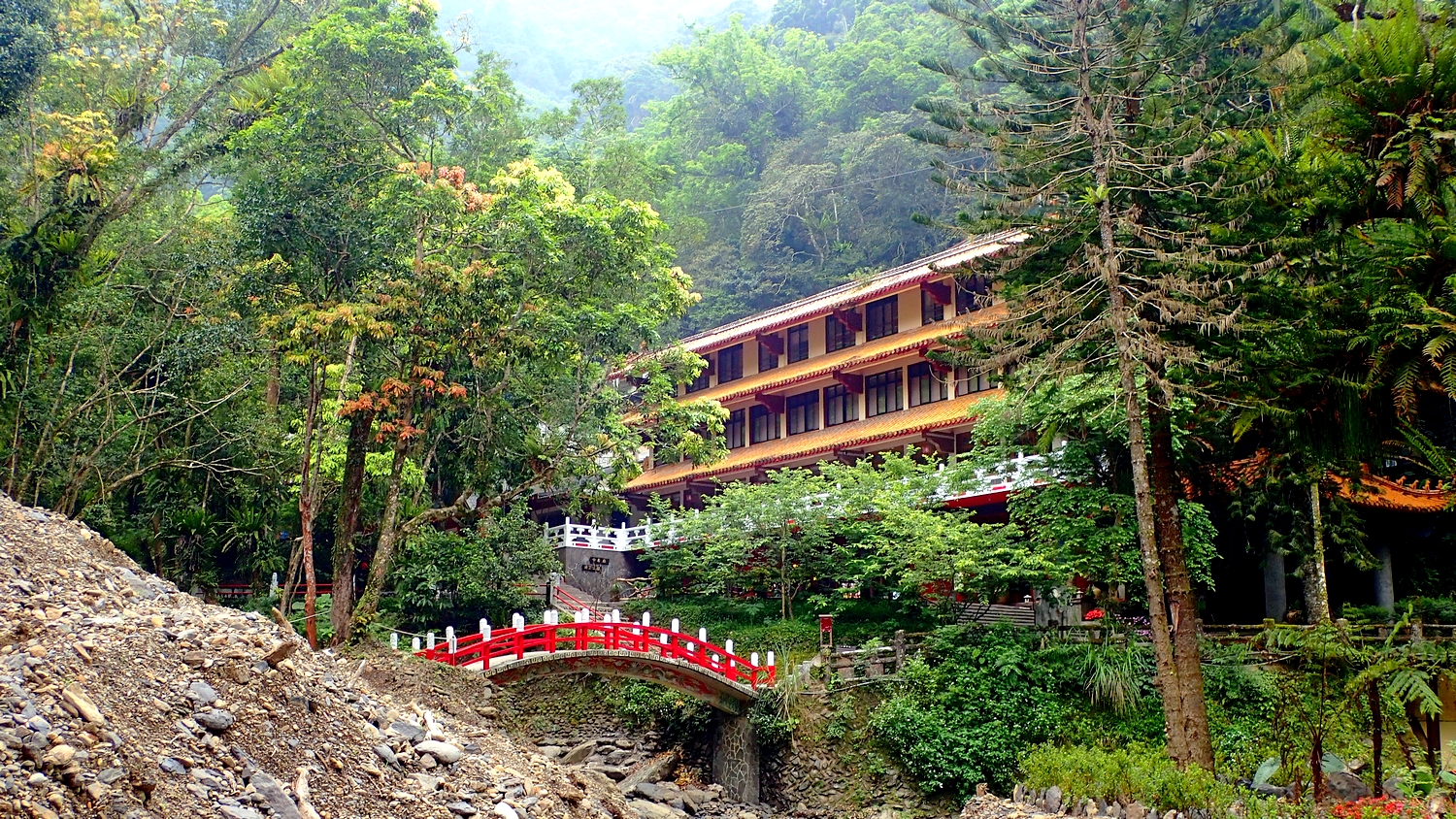 The Gondola leads to a place upper the waterfalls. The station seems to have had a movie theatre and a few attractions, all of those seems all closed and abandoned now. A route leads up above the station, from where the view is mind blowing. At the end of the route lies the Yun Hsien Resort. Which looks particularly empty for such a big facility.

And with a good reason for the facility was seriously damaged by from mud slides. As a matter of fact, a whole part of the Yun Hsien Resort is still closed, you can actually see the landslide. 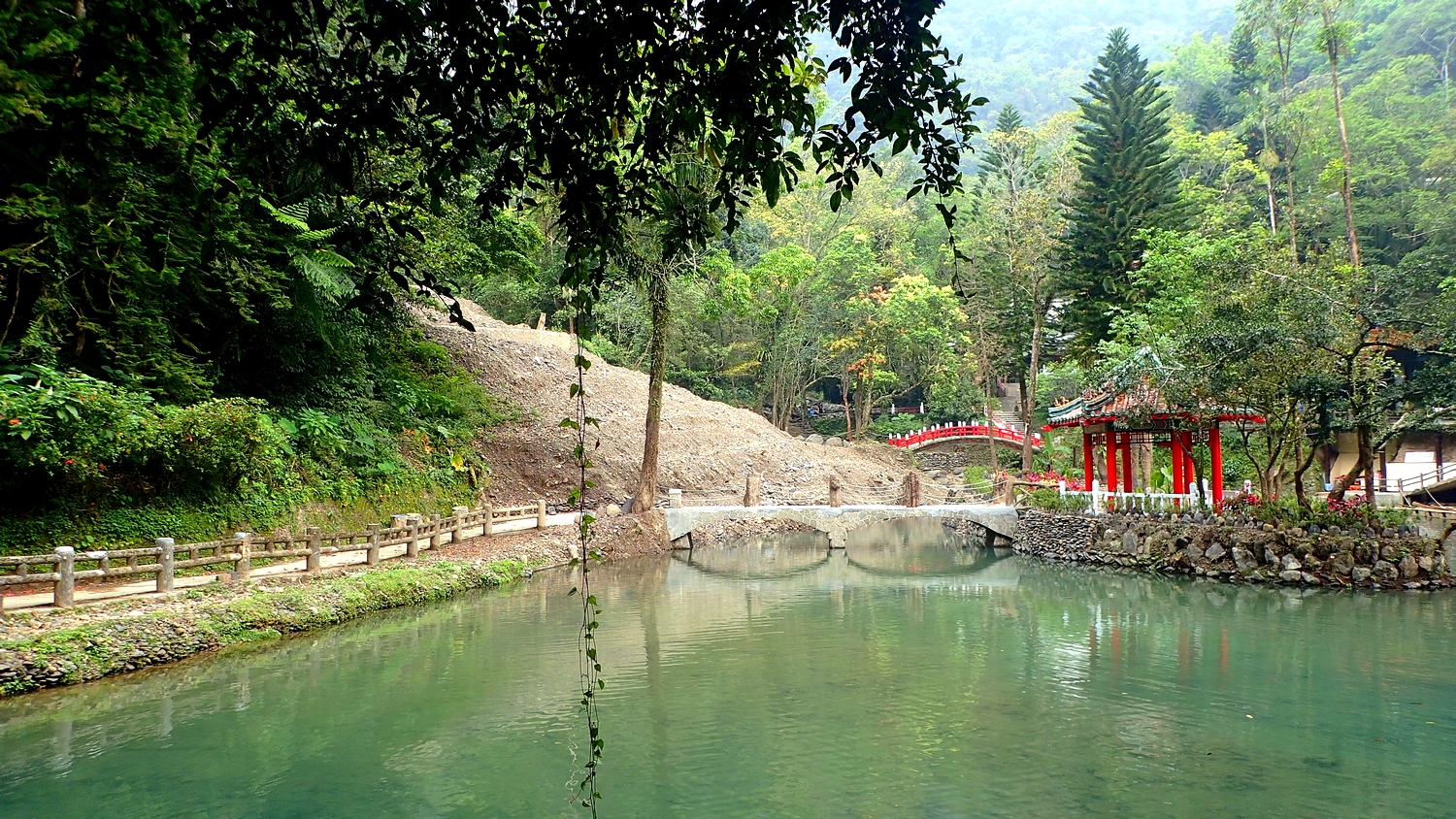 The Yun Hsien Resort used to be a kind of big theme park with old fashioned attractions for kids such as merry-go-rounds, a haunted house, shooting games, paintball, boat paddling, shooting stalls, a butterfly garden, etc. I’m not sure whether it’s because high summer season hasn’t started yet or if it’s due to the 2015’s typhoons damages, but everything’s closed and looks… abandoned. Welcome to ghost town.

It’s not creepy, though, some abandoned facilities give me a kind of Jurassic Park’s sensation. It seems like time has frozen, nature has taken over the land after a kind of cataclysm. The Resort looks like it’s still welcoming guests, but the villas nearby are dusty, messy and seem to have been forgotten for a long time. The pool’s empty. I feel like I’m walking into a forgotten world. Jurassic Park, Walking Dead, Lost, The Drowned World, I am Legend, just name it, it could have happened here. 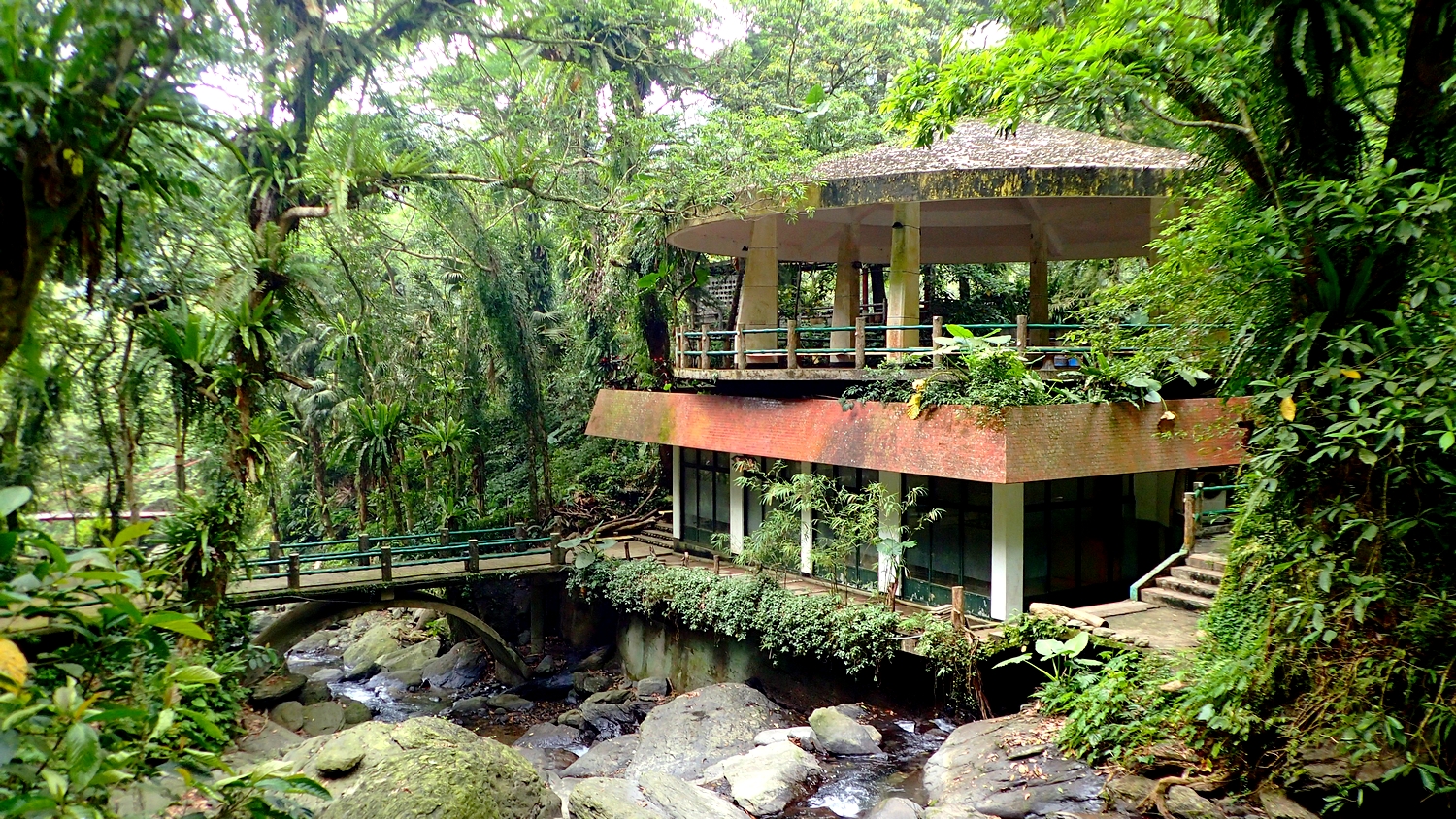 Surprisingly, in all this obvious mess of trees, vines and plants growing on concrete buildings, the garden are perfectly well maintained. The patch of flowers are skillfully taken care of, someone must take some time to cultivate those beautiful garden. It clearly contrasts with the ambient chaos. 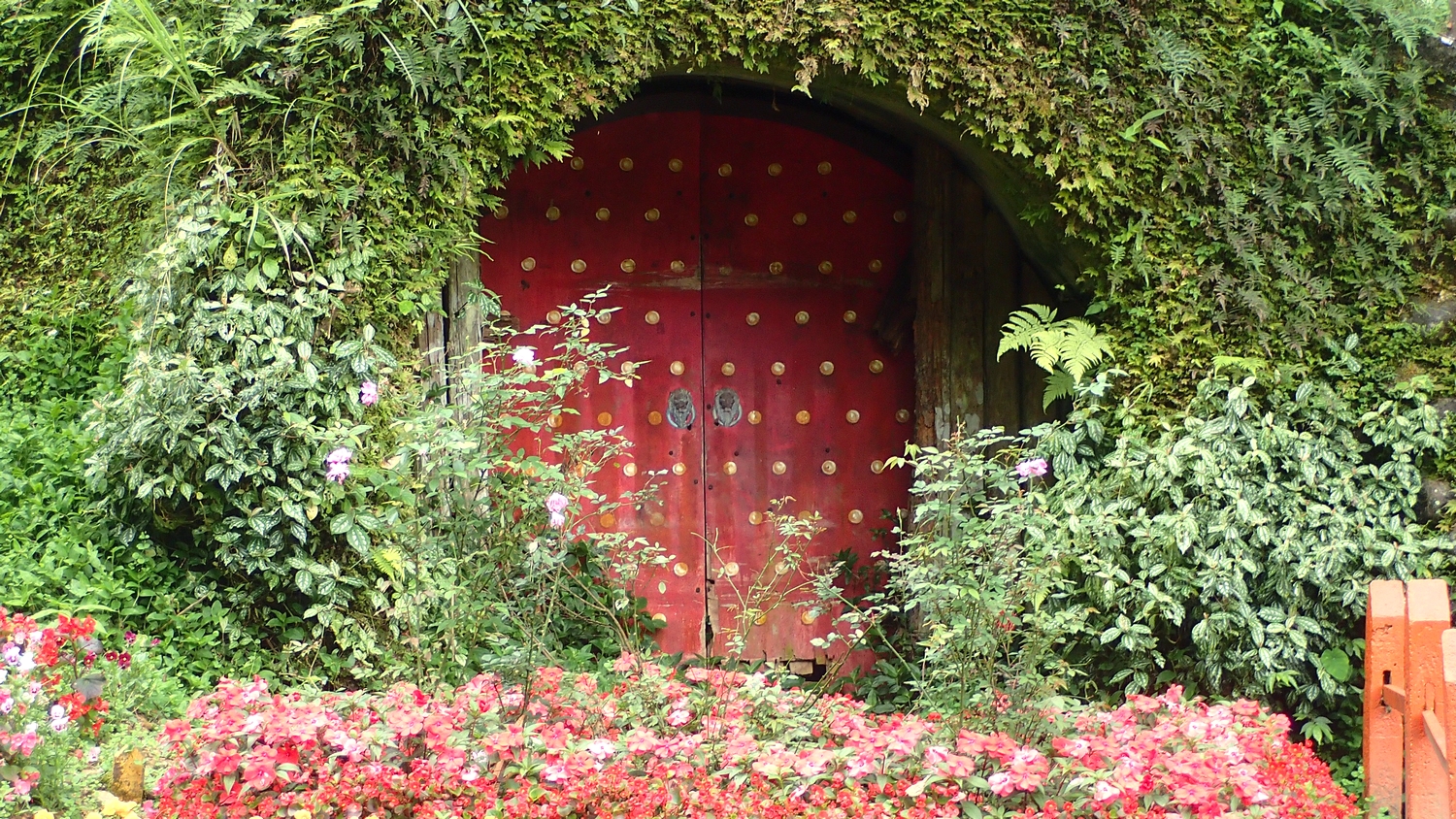 While swinging on those romantic swings in the ‘love garden’ (a garden with patches of flowers shaped in hearts should be a freaking ‘love garden’ right?) – we start to dream big. What if we could just buy this place? We’ll turn it into a giant backpacker hostel, and we’ll hire helpers and workawayers to help us clean it. It could be a community of travellers. Look at this giant rooftop over there, we could have a legendary barbeque party here don’t you think? We could live into one of those lovely villas, waking up every morning with the sight of the green misty mountains surrounding us. There must be plenty of hikes around here as well, in which getting lost would be a pure delight. What if we could live here? 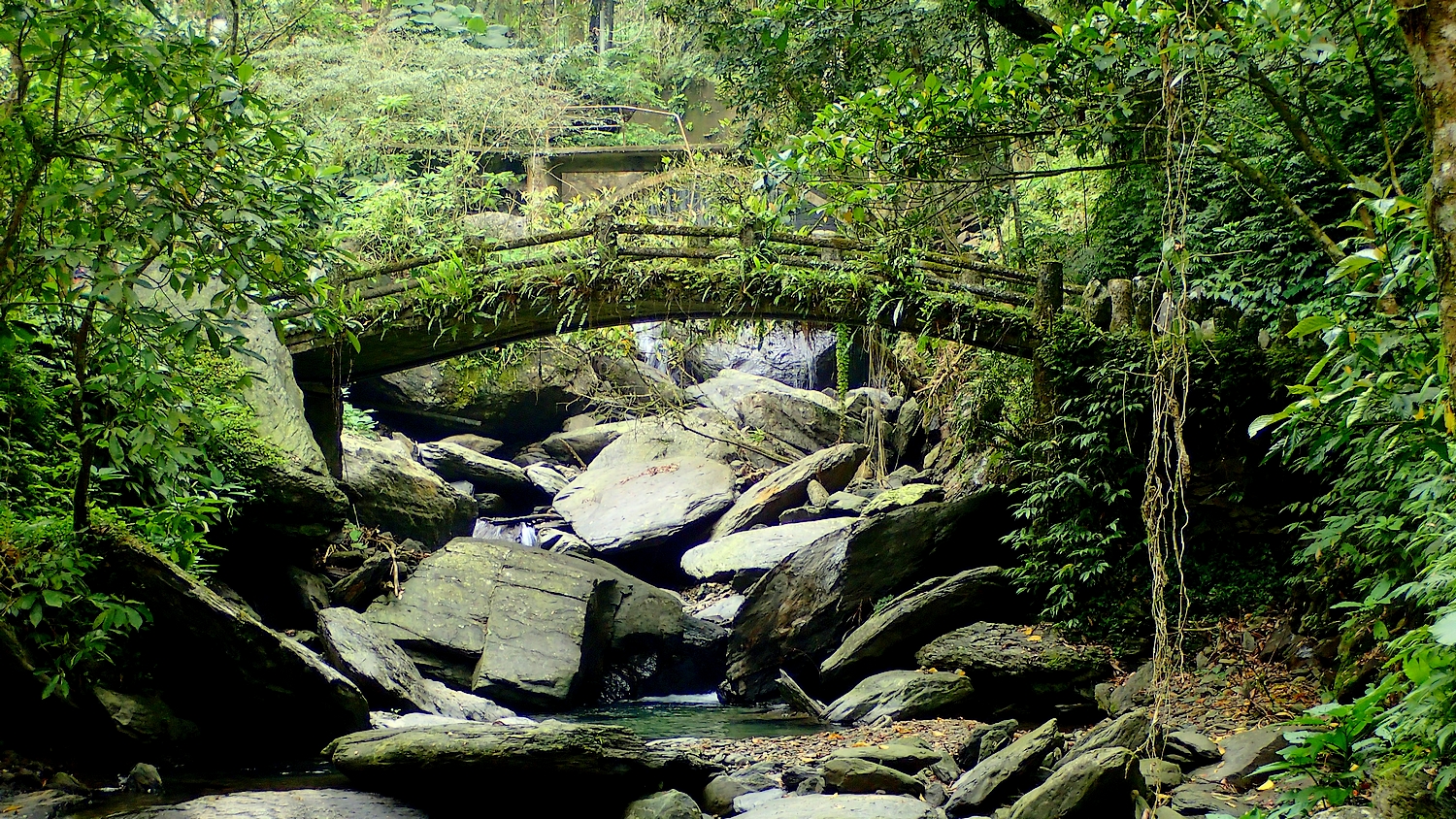 Have you ever experienced such thing? Getting in some place and being able to imagine your life there so clearly you feel you could almost touch it with your own hands. Dreaming big yet having this clear sensation that it could be possible. It would just take a little push, a stronger will, and an impetus coming from the depths of your guts to come true. It would just take to dare a little.

The reality is catching up with us. We need to go back to Vita, who’s waiting for us at the gondola station. It’s time to return to Taipei. Our minds filled up with “what if”.

(PS: A few months ago, I wanted to live in a castle in Andalucia…) 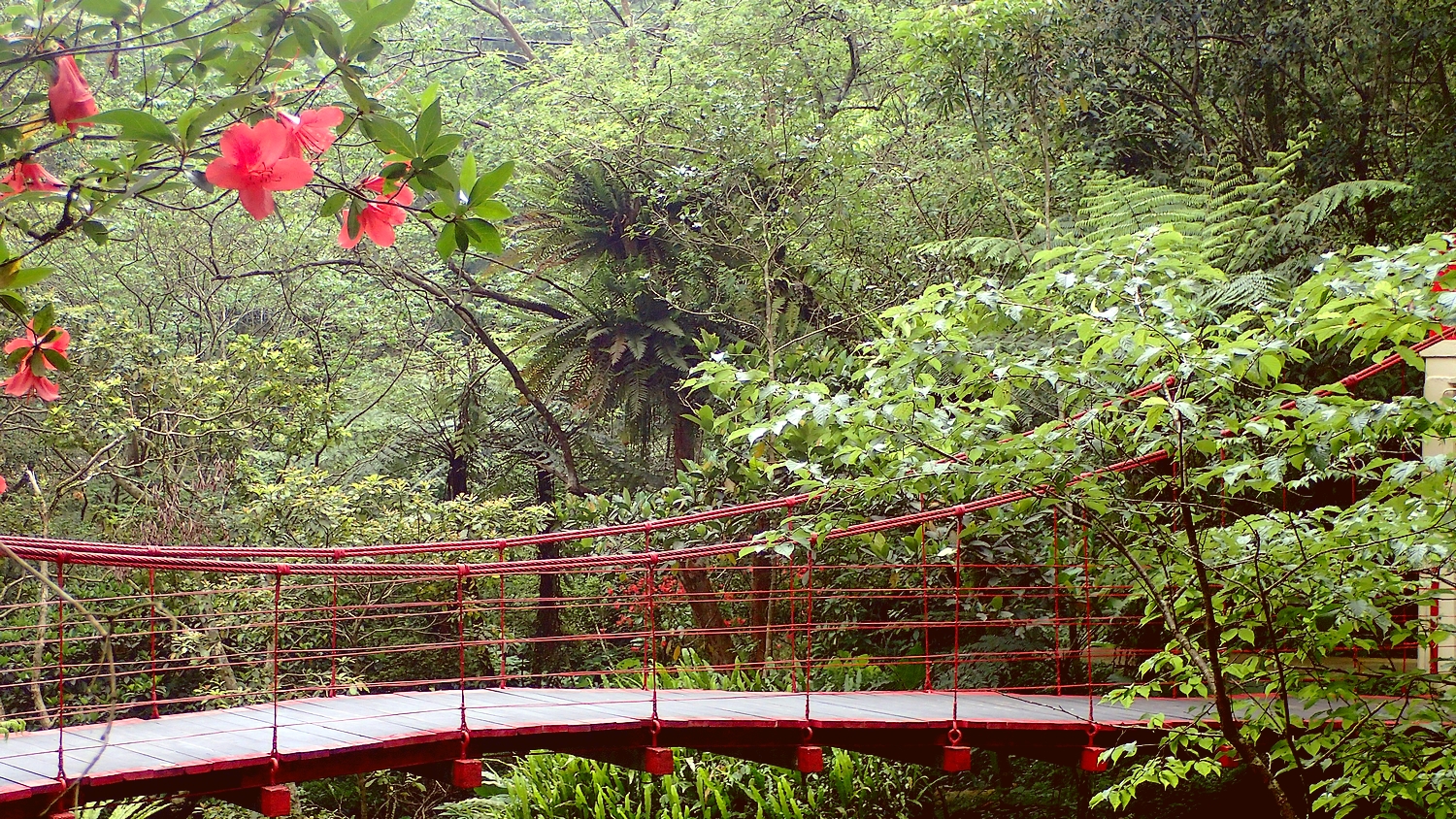 Oh and if you wanna try some local food, give a go to the rice steamed into a bamboo tube!

GONDOLA, WATERFALLS AND DAYDREAMS IN WULAI

One thought on “GONDOLA, WATERFALLS AND DAYDREAMS IN WULAI”