SINGAPORE I GOT A KICK OUT OF YOU

I landed in the city-state a little bit randomly.

When I decided to go back to France after my year wandering in New Zealand, I was wondering where I could stop on my way back this time. On my way to Auckland, I realized a long-time dream: going to Japan.

Which new land could I explore on my way back home? Impulsively, I booked a stopover in Singapore. I met Brenna, a Singaporean girl, while I was helping at Stewart Island Smoked Salmon. We got along pretty well and my eyes were sparkling and my taste buds all excited when she was telling me about her country. This would be a perfect occasion to see her again.

Well, that was settled, I was going to Singapore!

I got a kick when I first landed, Singapore.

When you just arrived from New Zealand, where there are more sheep than people (4 million inhabitants in the country), obviously more than 5 million people in a land almost  as wide as Lake Taupo, it’s kind of overwhelming. I experienced the same kind of feeling when I first landed to Bali, where the crowd made me dizzy. And the crowd in Singapore is quite something! Especially on busy hours, with this hot weather (between 25° and 30° on average), it can quickly become hell on earth. I had such a hard time to handle this that I was always searching for some green, calm park to have a break from the crowd. Well, finally I was no longer used to the city life and I got myself in the kind of country where there are (giant) malls at every single MRT station.

I got a kick out of your architecture, Singapore. 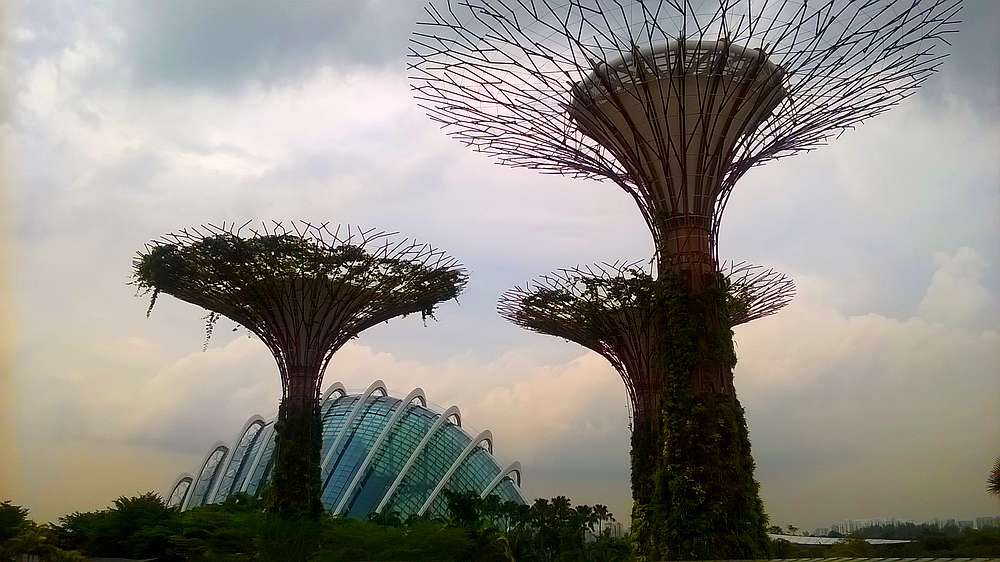 The city-state looks like a giant playground for architects, as if they had free hands to imagine and build whatever came up in their minds. Some Singapore’s buildings propel you in the kind of future you only found in comic books and science fiction novels. My nose up, I was feeling like the décor of my favourite books was finally real. No need to say I was smiling all along and that I had sparkling stars in my eyes. Here, a museum can be a lotus flower, a hotel a huge boat, a theatre a durian (which doesn’t stink), a bridge a DNA sequence, greenhouses are clouds on the ground and the buildings are scrapping the sky beside gigantic metallic trees.

I got a kick of contrasts, Singapore. 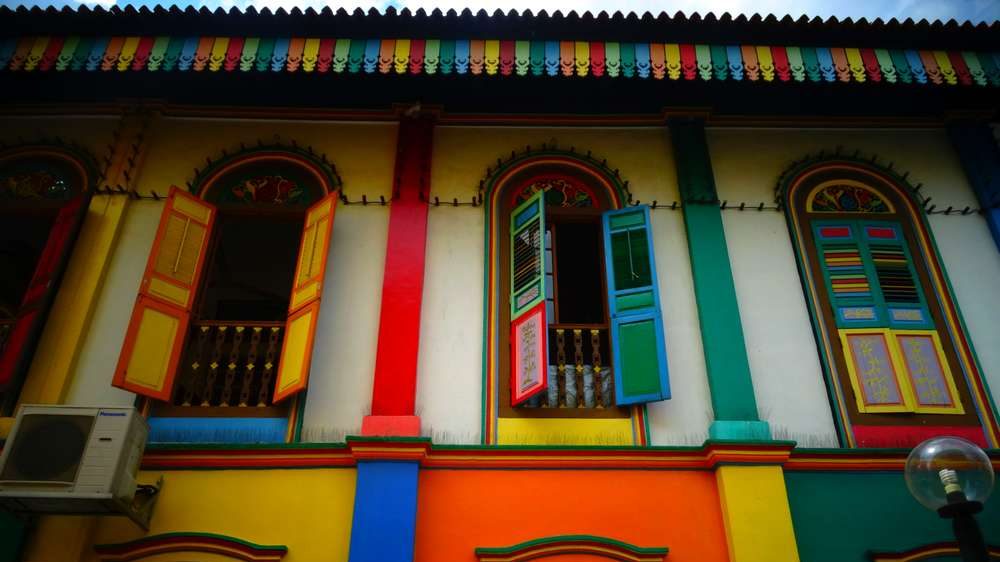 The XXIth century’s buildings and architecture rubbed shoulders with colonial houses, Buddhist, Taoist temples, and mosques as well as jungle’s haven. The city is overcrowded, noisy and stressful, but you’re never far from a park or a garden with trees and gigantic tropical plants and flowers. Singapore also astonished me by its multicultural population. Here, Chinese, Indians, Malays, Indonesians and Europeans are firstly Singaporeans. Each culture kept his own and unique identity and traditions, and that’s exactly what gives Singapore its obvious charms, for you can stroll from Little India to Kampong Glam to Chinatown in a few minutes’ walk or MRT ride. It was Ramadan when I was travelling there and I found myself right before Hari Raya, the end of Ramadan. This day is even a public holiday here. The weeks before Hari Raya, there’s this giant bazaar around the neighbourhood of Paya Lebar with carpet sales, food stalls, clothes, music… Ramadan is the occasion to celebrate for and with everybody, there are ornaments everywhere around! There’s a lot of Muslim people in South East Asia indeed and for me, that’s the first time I face this (overconsumption?) aspect of Ramadan.

I got a clean and neat kick out of you, Singapore. 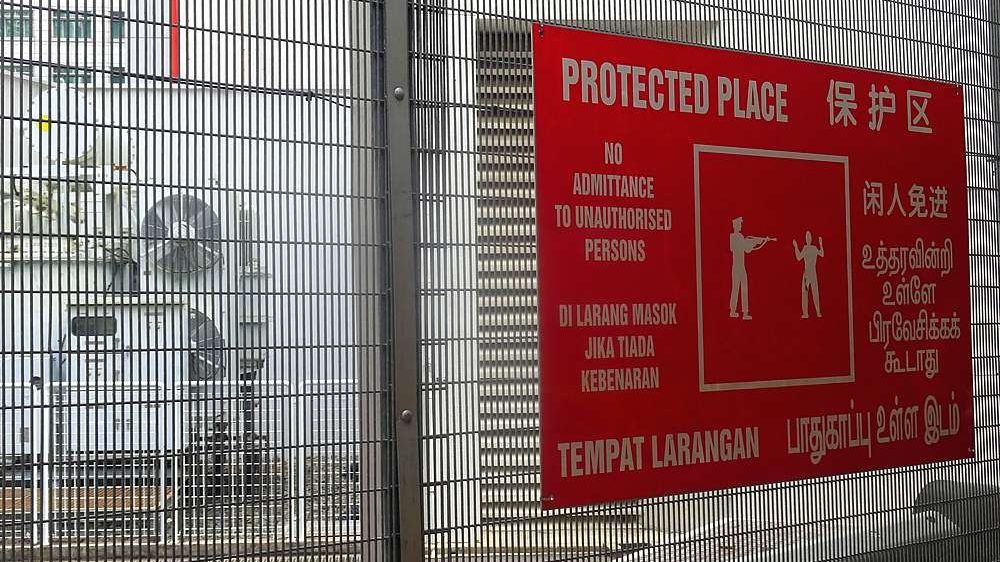 What was only chaos in Bali was so neat in Singapore. Everything’s clean, tidy and ruled by so many laws that it borders on the ridiculous. There are ban signs everywhere, and the amount of the fine you’ll have to pay in case you’re trespassing the law. Singaporeans are a little bit control freaks when it comes to respecting the law. And beware if you don’t respect the law, especially knowing that whistle-blowing is encouraged (there’s even a dedicated Whats’App group where you can drop up pictures of fellow citizens caught in the act of trespassing the law – no, I’m no exaggerating.) For example, chewing gums have been banned from Singapore since 1992 and there’s no way of buying some over there (except if you get a prescription from your doctor) and if you spit some on the ground, you’ll get a fine. It’s also forbidden to pee in the streets, and the citizens must legally (I merely insist on that word) flush the toilets. I mean, everything is making sense, but in that case, it’s written in the law, you see. You can possibly get fined if you’re trespassing. And there are loads of laws like that. Singapore turned the common sense into laws in order (that’s the accurate word, isn’t it?) to become a perfect clean city. Sometimes, it almost feels like the Orwell novel’s 1984. But it works. Singaporeans are living in a clean, neat and safe city, and the criminal rate is ridiculously low.

I got a kick in my taste buds, Singapore. 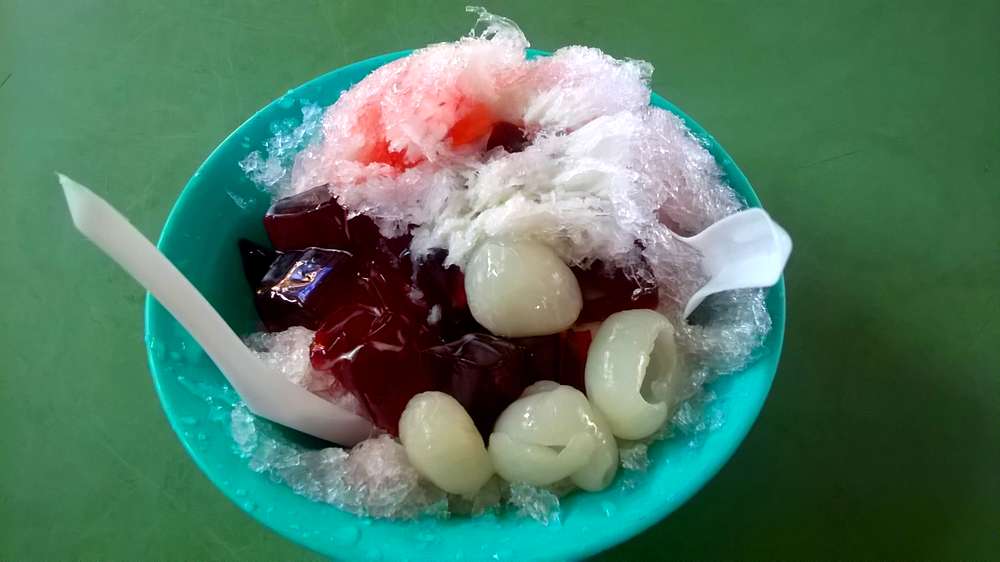 They (my tastebuds!) had such a really enjoyable time in the city-state, where you can discover a new type of cuisine every day. Singaporean, Indian, Malay, Indonesian, Vietnamese, Chinese, Japanese foods (etc!) can be found in every food court in every corner of the streets. Every kind of Asian food is meeting here in Food Courts and Hawker Centres. I ate a Carrot Cake which is not a dessert, but a mixture with fried radishes. I also tried a red beans jelly with shaved ice (Ice Kacang) and despite its weirdness I had a great feast! I bought myself some Kaya, this green neon coloured coconut spread that I fell in love with. I recommend you to be careful with Durians, though, for those Asian fruits smells very strong: it stinks like cheese. And as weird as it sounds, it tastes exactly as it stinks, it reminded me an old sock spread with Munster cheese that had been soaked up with the sun from the rear parcel of an old car. Yep, we can say that I didn’t really like that fruit.

I got a bookseller kick, Singapore. 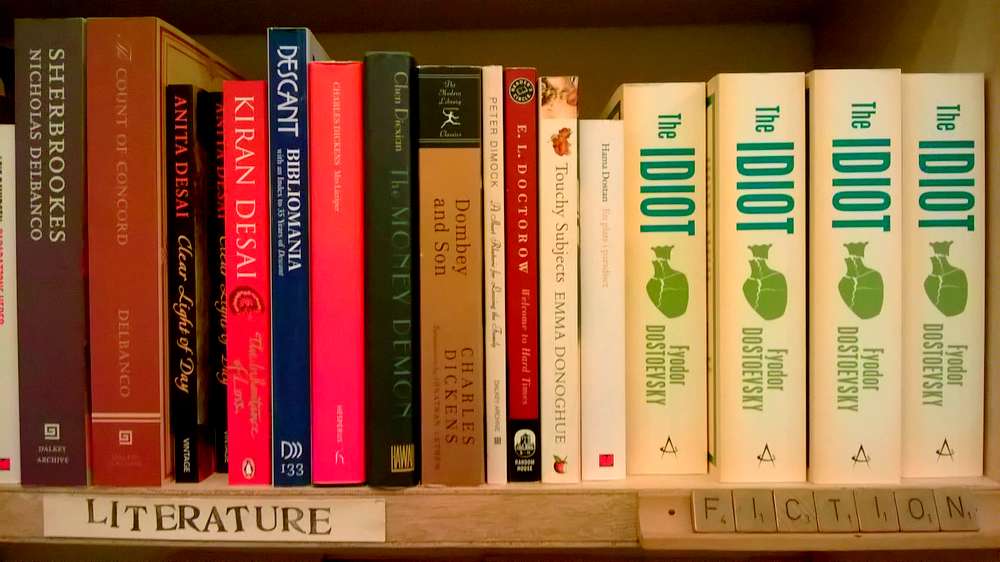 I got a huge kick of failure too, Singapore. 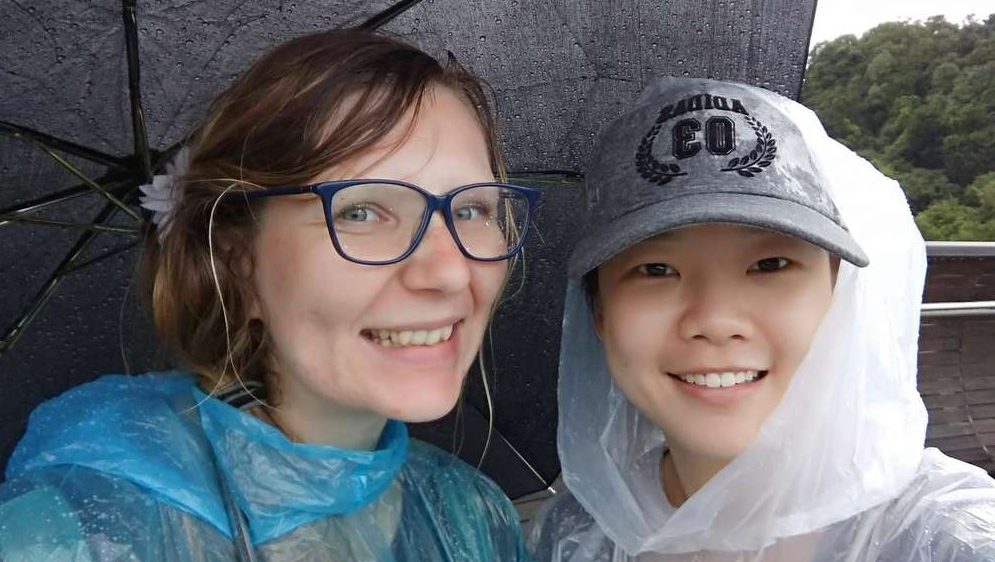 Except for Brenna and Kabila, my encounters almost all ended up in failure. My Couchsurfing host welcomed me with kindness and comfort in his huge (and wealthy) apartment, but something felt wrong. Even though he was working a lot and didn’t have a lot of time to spend with me (and I’m completely OK with that), he didn’t introduce me to his kids (who were living under the same roof as me) and wasn’t that much interested when I was suggesting him activities we could do together. We still had great talks together, but later on, he confessed he was only hosting girls, for he sometimes felt very lonely… Yep. Not only we didn’t really get along, but besides that his intentions were kind of dodgy. Lucky for me, nothing bad happened except for this perpetual discomfort. It was my one and only bad experience with Couchsurfing. I also met other people thanks to Couchsurfing, we were hanging out for drinks or walks but I don’t know why, I didn’t get along with anyone, except Kabila, who was a very sweet girl and took me out for some amazing Indian dinner.

I got a sad ending kick, Singapore. 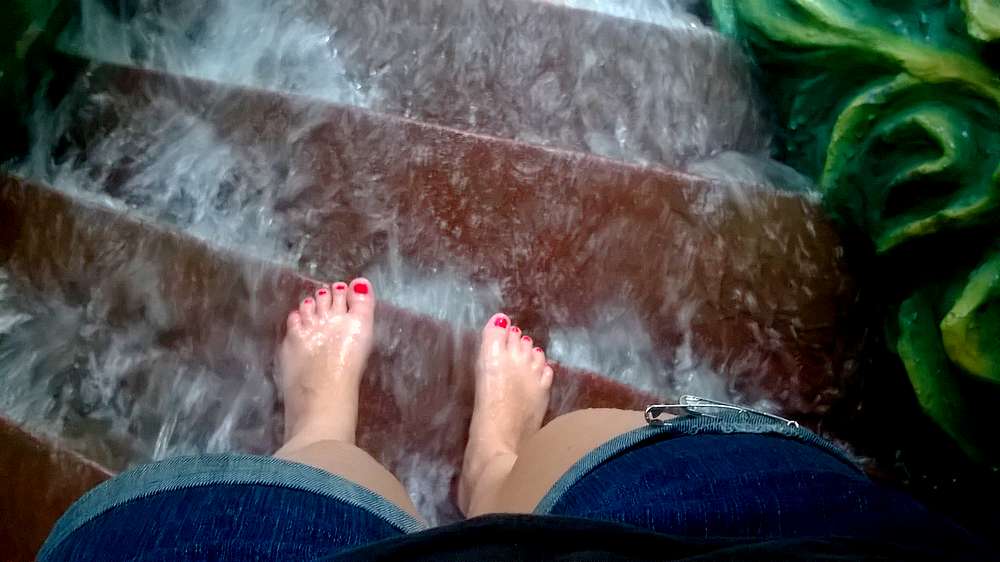 That was the end of a long journey for me. One-all-year-journey. So my amazed moments were mixed up with moments of doubts and loss of my bearings and my balance. Future was bright, for everything was yet to imagine. But I know myself pretty well, I’m easy going with nostalgia. Each corner of Singapore brought me back to New Zealand, where I was comparing the incomparable. “Am I already too misfit?” was I writing back then, “too much in my New Zealand bubble? And it cost me so much to make efforts, really. I wish I could be left alone, I wish I could hibernate for a week.” One thing was sure, I wasn’t ready at all to come back to my home country. 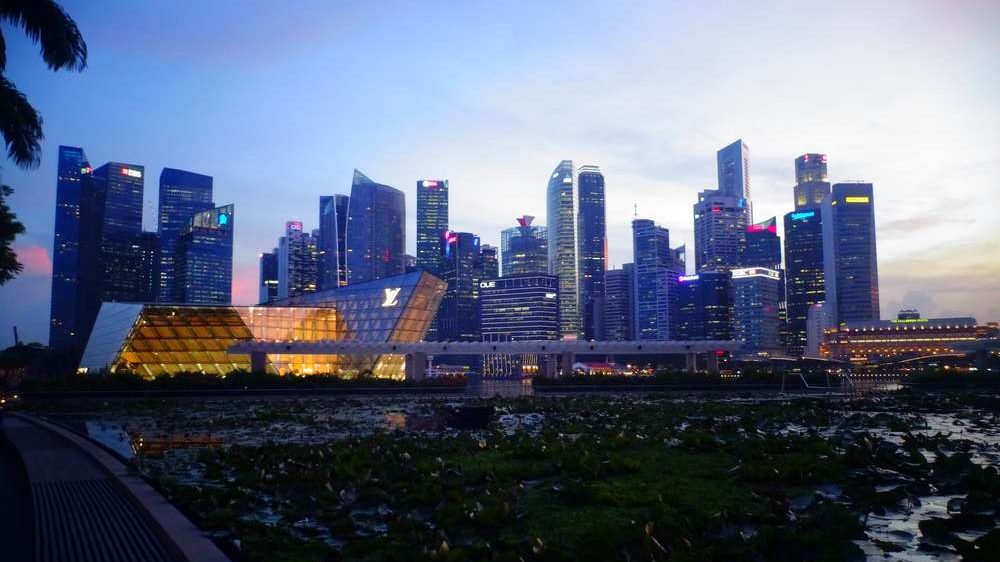 So, thank you, dear Singapore, for all of those kicks I got. It was very important for me to witness that the world has plenty of beauty in storage and that they’re not all from New Zealand.

SINGAPORE I GOT A KICK OUT OF YOU

5 thoughts on “SINGAPORE I GOT A KICK OUT OF YOU”