Hence I moved in prison cell number 17, into the oldest prison of New Zealand: Napier Prison. I even heard it’s a haunted one. Even the Ghost Hunters show came here. My cell is most probably the tiniest of the facility, but that’s for the best. So I won’t be afraid that a ghost sneaks in. Basil the cat is a sneaky bastard, opening creaking doors that make you flinch like crazy. 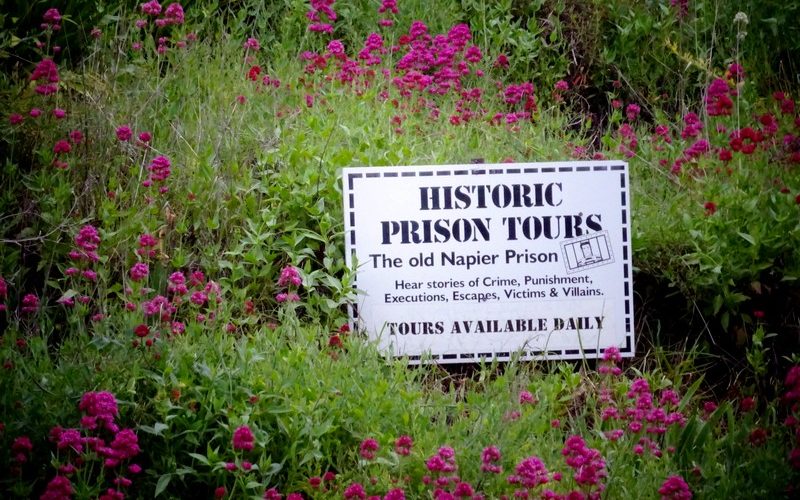 The prison in Napier is the oldest one in New Zealand. It was built in 1862 and was still used until 1993. It used to host women, men, kids and even lunatics for the city had no orphanage or asylum. In the prison, there was a death row and hangings happening in the courtyard. That’s why there’s still a small cemetery within the prison premises. For the record, the death penalty was abolished in 1961. Until then, 85 people were executed by hanging in the country –which is not so many, but New Zealand is a small country, remember?! During the XIXth Century, four hangings were conducted at the prison, and people used to watch the executions from the top of the prison wall.

There are plenty of fascinating stories about that prison, which hosted Maori warriors, mass murderers, violent gangs, and you ca still see some damages from the violent 1931’s earthquake, the deadliest natural disaster that occurred in New Zealand so far and shook Hawke’s Bay pretty badly, destroying every building in the city centre of Napier.

Another fun fact about Napier Prison is that it’s supposed to be haunted. The mass murderer Roland Edwards still wonders around, especially on July 15th, the anniversary date of his death. There are few accounts of paranormal activity around the prison, and the show Ghost Hunters even came here (you’ll find the link to the show below). This is why the prison, which is now more or less like a museum, offers two kinds of tours, the historical one and the ghost one to allow guests to get a glimpse of this particular building.

A particular building indeed, for it had many different purposes since it was shut down in 1993. It reopened in 2002, with the help of the Waaka family who bought the place and probably saved it from destruction. It has been a kind of tourist attraction since then, offering tour guides in a lot of different languages and has now a good ranking on websites such as TripAdvisor or Lonely Planet. In 2006, though, the show Redemption Hill was filmed there, a reality show where a bunch of kids was locked up inside the prison to get a glimpse of what their life could become if they kept acting as delinquents. Back then, it was also a backpacker where tourists could sleep into furnished prison cells. It’s not a backpacker anymore, even though the helpers can still have their own prison cell if they wish to –and if they are too scared to sleep within the prison walls, there’s another building to host helpers, which is less… Well, creepy.

HELPING AT THE PRISON

I’m going to work here with Marion Waaka, the owner, Emma and Shae who are real employees and a happy group of crazy helpers: Selena from Canada, Lisa and Gina from Germany, Tom and Rory from the UK, and Kim and Julien from France. Selena even explains to me that the reason she hired me was that she also helped a few months ago at the Tatahi Lodge in Hahei. New Zealand is such a small country.

I’ll be working at the reception desk with Emma, Shae, and Selena, mainly to translate audio guides into French. As well as being the prison owner, Marion also owns an audio guides company, Citywalksz, which allows you to download mp3 to have guided walks everywhere in the world all by yourself. All you need is a mp3 player or your smartphone and good shoes. No surprises, I have to translate the ‘Best of Paris’. 17 pages of history about the Louvre, the Arc de Triomphe, the Eiffel Tower… Funny thing is I’m actually learning loads of things about my own capital city which I had no clue about. Translating gives me hard times sometimes for I’ve reached that point where I’m average in English and losing my French vocabulary by speaking English all the time (Basically, I’m fluent in neither languages. My mother tongue is slowly slipping out of my head and I’m still speaking like a child in English. What a tremendous situation indeed!)

My three-hours-work-a-day of translation will also be clocked by the touristic life of the prison, as selling tickets for tours, setting up the tourists audio guides, opening the prison gates with the traditional catchphrase ‘Welcome to Napier Prison, that’s 20$ per adult, 10$ for kids, and we have two kinds of tours, the historical tour and the ghost tour, blablabla’

What still astonish me today is that they gave me ‘responsibilities’. Within two days, I could welcome the customers by myself, even cash their tickets. A week later, I was opening the prison facility on my own. And I’m just a casual helper here. I realize how much I’ve missed being around customers, even if this time my vocabulary is limited and that sometimes I understand shit when the customers are speaking to me. But I still like speaking with different people every day, especially if they are as nice as this old Scottish guy –I think he would have liked to take me with him on his travels.

On a Saturday evening, the prison was entirely privatized to welcome at least 200 electricians, who were on a kind of conference tour in Napier. They’re arriving there with buses, dressed up as prisoners with the black and white striped suits. We welcome them dressed up as a prison warden, and we’re supposed the make the handcuffs clicks and be intimidating towards the ‘prisoners’. The prison was all designed for the occasion, there’s a big tent with tables, a classical music band playing, a caterer and a sommelier to take care of these wonderful people. Is there any need to say that they will all end up completely and happily drunk? The actors of the Scary Nights tours are here too, performing their scary part and making the prisoners scream in their bloody ghosts and psychopaths costumes.

Speaking of this Scary Night Tours, once a month the prison is having those special tours, which I participated as a guest with my friend Anaïs just before coming settling in my cell number 17. The concept is kind of like the Europa Park’s Horror Nights for those who might know this German theme Park. Basically, a bunch of actors dragged us into the prison at night, throwing us into dark cells and telling us all kind of scary stories about the place. And that’s when you realize you’re not alone in the prison cell, someone is hiding in there too, to make you shit your pants out of fear. Ok, I must confess, this was pretty scary.

Life in Napier Prison was also about free pizzas nights once a week, my first Flammkuchen in New Zealand (that’s a specialty from my region, Alsace, a kind of flat pizza with cream cheese, onions, bacon, and cheese) which I cooked with the help of Gina and Lisa, my first-time-ever pumpkin pie that Selena bake for Thanksgiving (and my taste buds were very thankful for this experience!), fake tattoos on every inch of my skin, playing Shark attack, Etch-A-Sketch, darts, Connect 4 and Cnuno like crazies (Cnuno is simply the cheap version of Uno.)

We sometimes sit on top of the prison wall that Tom has trimmed and where the people used to come to watch the prison’s executions. As for us, we simply watch the Ocean or the sun setting behind the trees (so basically, there’s no sunset to watch, for the trees are hiding the show). It might sound weird but I’m going to miss this prison.

Life in Napier Prison is also about water fights with Tom. Those childish battles lasted several days. With revenge, showers, garden hose, glasses, water bottles… And ended up with eggs and flour. Life at the prison was fresh, hilarious and … Orange.

When I cross the prison gates for the last time, to hop on Gina and Lisa’s van in which Selena will be driving me to Levin, where the Italian lover awaits, I feel like I’m leaving something utterly precious behind me. Smiles. Crazy laughter. Something of my child’s soul. And definitely true and genuine friends.

WHAT I’VE LEARNT THERE: