The very reason why I came to Japan in the first place before flying to New Zealand is called Noriko. She is my penpal, whom I met via the Postcrossing website since last August 2014. When I wrote her about my WHV plans, she wrote me back that I would be welcome in her house in Matsumoto. As crazy as it seems, I believed her. So, here I am, a few months later, meeting in real life my friend Noriko. She is such a nice and lovable person and has a lot of plans for me to enjoy Japan. Amongst them: the Matsumoto Castle. 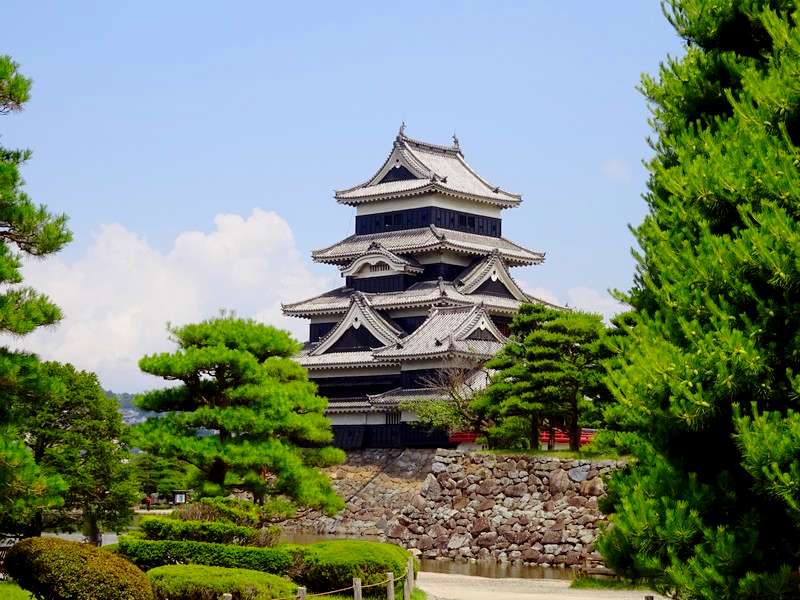 I’m lucky enough to get a guided tour in English in this amazing castle. The guide is retired and a volunteer here, and he started to learn English when he stopped working. He’s very kind and most of all he’s very patient considering that we are both speaking in a language which is not our mother tongue.

There are two main buildings in the castle. One has three stages, the other has five. It was built around 1504 and was called the “black raven” because of its colour. It was supposed to be a war castle, no one ever lived there. Unfortunately, it was never really used for war, its purpose was to prove the lord’s power and eventually discourage the enemies to attack.

I am completely amazed when I discover the “hidden stage”, the stage you cannot see from the outside. The ishiotosi, these kinds of blinds that were used to throw stones at the enemies without being seen, are kind of fascinating for me, as well as the shachi, those mystical creatures with tiger heads and fish bodies. They’re supposed to protect the castle from fire (which is its nemesis since the castle is made out of wood) because in the legends those creatures were spitting water on their enemies (super scary, huh?)

Inside the second building, there’s a room called “the moon room” (Tsukimi Yagura) which is drawing my attention: it was used to party under the stars with a direct moon view... It’s been said that we can see three moons there: one in the sky, one in the moat’s waters, and one in the sake (and three more if the sake is strong enough haha!)

While I’m visiting the castle, the local television accosts me and ask me a few questions because they’re shooting a report about the tourists’ habits and the places they visit while in Japan. So, they ask me what I’m doing here, where I’m going, where I was, what I like in the castle… I’m babbling, OMG, why are they asking me all of these questions?! Later on we will have a lot of fun watching the show on TV, they finally kept only 10sec of the interview.

When we get out of the Castle, we stumble upon a wedding and then a Bollywood production shooting.

This castle appeared to be really famous, and that’s true for sure that the view is stunning from this side of the river…

Matsumoto Castle, Matsumoto, Nagano Prefecture. You light be able to catch a train from Tokyo to get to Matsumoto.