As serendipity seems to be a serious part of my trip, I realise that Clémentine, my friend from Te Anau, will be in Bali at the same time as me. She’s having a stopover in Bali before going back to France. I’m more than thrilled to see her again, considering that I’d cried like a baby when she left Te Anau last January.

We’re going to spend a whole week together and we both are terribly excited to see as much as we can of the Island of Gods. 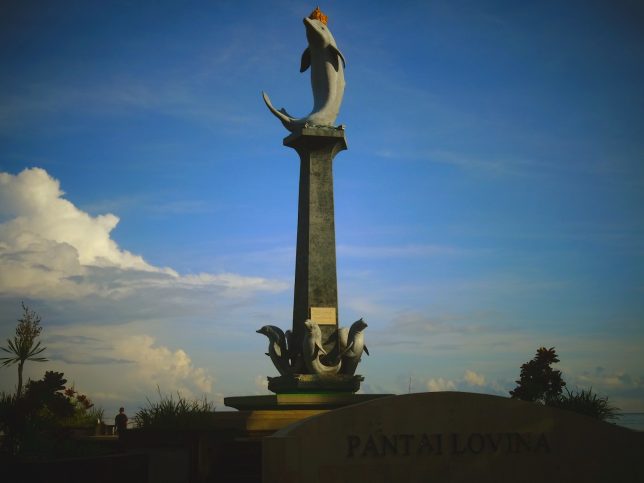 Wayan is dropping us at our cheap hotel (it was something like less than 10€ a night for two, breakfast included), and we soon discover the reason why. Half of the place is flooded and the other half is home for a few… Cockroaches. This generated a few frights (followed by giggles), because Charles-Antoine the cockroach is a playful bastard, always there when you’re not expecting it to be.

On the other hand, the lady at the front desk is great, she books us for the day after a ‘dolphin cruise + return drive to Ubud with a lot of sightseeing stops’ combo for a very reasonable fare. We stroll around Lovina under the rain. It’s easy to see what the place is famous for, there are dolphins statues everywhere – which are kind of kitsch and make us laugh a lot: seriously, a dolphin with a crown?! Lovina is like Amed for it’s a succession of little villages along the coastline and this famous 8km black sand beach called Lovina Beach. We stop a bit at the pontoon to witness the sunset and that’s where we meet Diana, a very sweet and friendly German woman with whom we go share a dinner with.

Wake up at 5:45 to depart at 6:00, we board on a little jukung (a traditional Balinese canoe) named ‘Mona Lisa’ to witness the sunrise from the sea. At first, there are just us, Clémentine, our guide and me. I’m slack-jawed with wonder gazing at the sky colours. We head up towards a group of jukung which are obviously looking for dolphins as well. And very soon, we’re surrounded by about 30 dolphins!!

But then I start to become disillusioned. As soon as a dolphin appears somewhere, over the 40 jukung (yes, there are as many as 40 jukung in the sea at that moment!) start to rush towards the mammals. It’s a race, almost a chase. I try to enjoy the moment for the dolphins are jumping joyfully, somersaulting and all, but I can’t help thinking of the lack of respect of the animal here. Boats are following them really close, blocking their passage sometimes. And I don’t even mention the tourists starting to complain when the dolphins disappear (it’s a WILD animal, for F* sake, it’s not going to somersault just in time for your bloody selfie!) Seriously, put your camera and phone away two seconds and just enjoy.

I guess that the locals don’t have any clue about animal respect, and they use any resources they have to make a bit of money (it seems that it’s all about the money in Bali.) Dolphins are their livelihood. Chasing them is a chance to get a good tip. Anyway, this cruise and the one I had in Paihia, New Zealand, are like day and night.

HOW TO BE DOLPHIN FRIENDLY?

My recommendation would be to boycott and avoid this kind of tourist tours, but I feel like a fraud giving this kind of advice while I tried it and was completely blind about it. I should have informed myself first because I realise now that a few people shared my opinion and could have told me what it was all about before I go. So, I made a huge mistake, but maybe that’s for a good reason. I would be more alert next time, and I can share here my experience and give you some recommendations for dolphin watching (but also whale or any type of animals.)

I think it would be best to witness the dolphins from the shore or even during a snorkelling trip as long as you keep your distances with the mammals. Let’s not forget that dolphins are wild animals and that they get to decide if they want to play or swim with us, humans. And not the other way around.

On this subject, there a very interesting piece on Wikipedia: https://en.wikipedia.org/wiki/Whale_watching which basically explain that human presence has an impact on the animal’s behaviour. Even though you’re just watching, a full speed boat can awfully perturb the sea animals for they communicate with sounds and have an overdeveloped hearing sense. And for one dolphin happy to play with humans, how many are suffering from stress about it?

This is the reason why many countries adopted common-sense rules about this kind of tourist cruises which includes those points:

So, here’s my advice: unlike me, be aware of what you’re doing.

Ask for documentation, ask the cruise company about their ways. Is it environment-friendly? Did they sign up an Act or something for the preservation of the animals?

Don’t get fooled or blind about the perspective of witnessing those animals with your own eyes. I know that seeing dolphins, whales, orcas or whatever is an amazing experience. But maybe you’ll see some from the shore another day – it happened to me a few times in New Zealand!