Which consist into the celebration of divinities called kami, which are more spirits than actual gods. They are mostly elements of landscape or forces of nature.

You can also read: Three Buddhist Temples in Japan 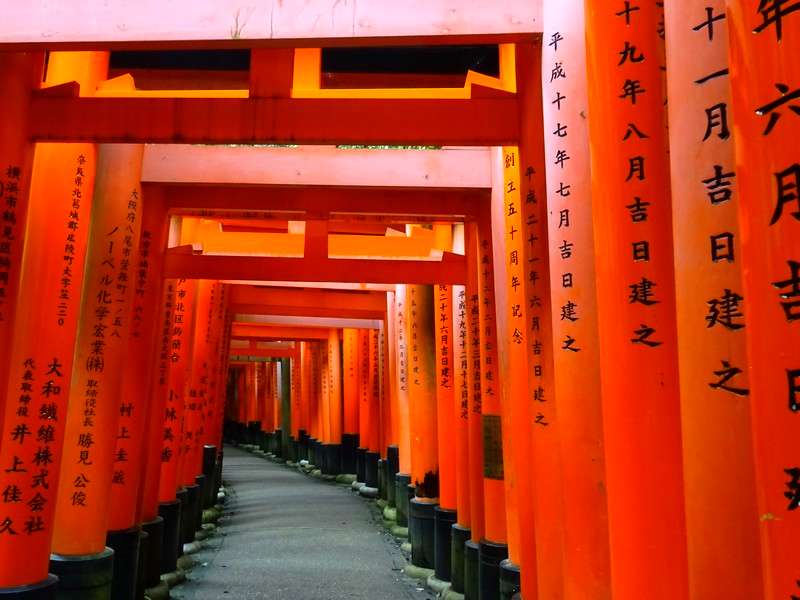 There are always gigantic gates at the entrance of Shinto shrines, which are called torii. Then there’s the chôzuya where you have to wash your hands (left hand, then right hand) and wash your mouth so you’ll be purified before you pray.

Into the shrine’s courtyard, you can find loads of votive plaques called ema (in a shape of torii, foxes and so on depending on the shrine), where you can write down your vows, your wishes, your prayers to the kami. There are always little gift shop stalls where to buy amulets to pass up your exams, be safe driving your car, be happy as a couple, protect your children, etc.

You can make an offering but also do some divination, which is called omikuji. Basically, it’s like a fortune cookie, you have to shake a big box which gives you a number, which will tell if you’re going to be lucky or have a miserable life. When the prediction is bad, you tie a little piece of paper to ward off the curse.

Then it’s time to ring the zuzu (a big bell, bend twice, clap twice, make your wish, and then bend one last time. That was the prayer ritual.

Most of these habits also apply to Buddhist temples, knowing that both religions are not exclusive and quite tolerant towards others. In Japan, it’s possible to be both Shinto and Buddhist and it’s okay.

Obviously, I was amazed in front of every single shrine, every single temple, impressed by their greatness and beauty, their statues, their lanterns, their colours and their traditions… It’s so unusual, you know, for a European; I guess that Japanese must feel quite the same when they’re facing the Strasbourg’s Cathedral. For sure, I won’t ever make fun of Japanese taking pictures like crazies when they’re travelling Europe, for, I honestly behaved exactly the same in Japan… Anyway, let’s go back to the shrines: 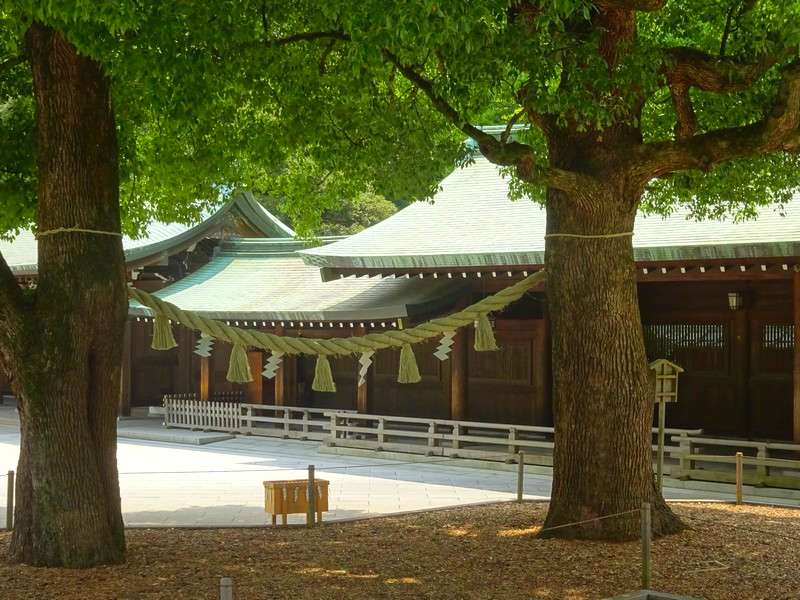 Meiji-Jingu shrine is located in the very heart of a forest in the very centre of Tokyo, just beside the Yoyogi Park. The stroll is very nice, very peaceful (when there are no loud tourists). This shrine is dedicated to the divine souls of Emperor Meiji, who died in 1912, and his spouse Shoken who died two years later. Meiji-Jingo shrine is the biggest Shinto shrine in whole Japan.

The garden (the forest I was talking about) was designed by the Emperor himself with 10 000 trees imported from whole Japan. The temple was destroyed during WWII, and rebuilt in 1958. It has to be known that Emperor Meiji ruled during the Meiji period (1868-1912) which was kind of the era of modern Japan, where all islands and states were finally united, privileges abolished and borders opened. 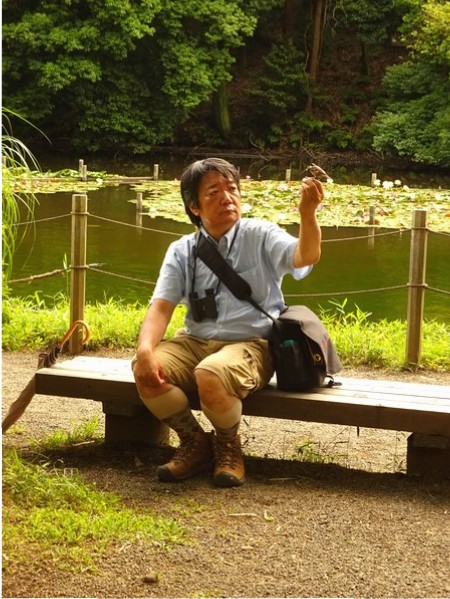 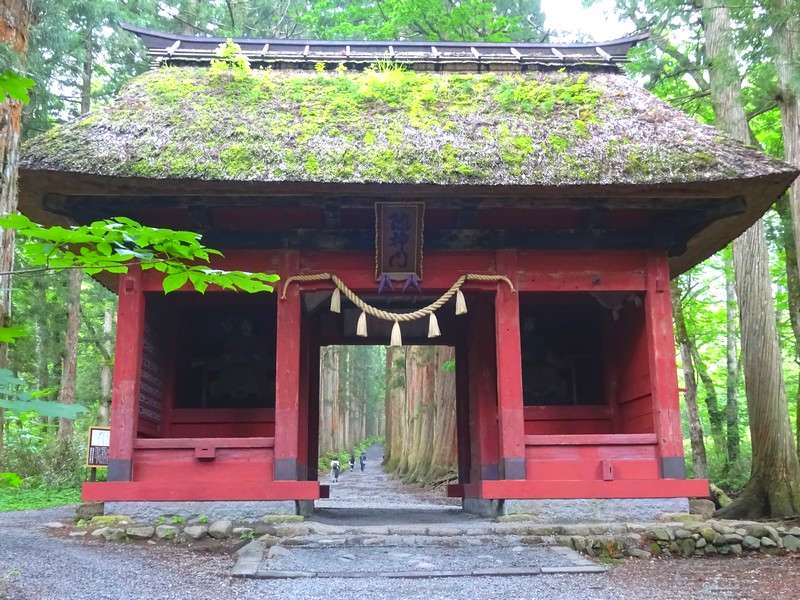 Into Joshin’etsukogen National Park, in the mountains, in the middle of the forest, is the Togakushi Jinja Shrine. A 2km path in the middle of gigantic trees leads you to this magical place. It’s simply stunning. My recently smoke-free lungs had a hard time keep up with the distance and follow Noriko and her family through this fairy-tale like forest until the shrine. I reached it, in the end (completely out of breath) right on time to see the clouds engulfed into the mountains.

This shrine has a delightful story. In Japanese mythology, the Sun Goddess hid herself in a cave on Kyushu Island, bringing night and darkness to the world. In order to make her come out, the other deities performed dance shows in front of the cave. Finally, she came out and the deities threw away this cave door far away, so the Sun Goddess won’t hide anymore. This stone door landed in the very same place where the shrine now stands up, Togakushi meaning ‘hiding door’. The shrines are then dedicated to those deities who brought back sunlight on the world.

Togakushi-Jinja, Togakushi, Nagano Prefecture, Possibility to reach the temple with the bus from Nagano. 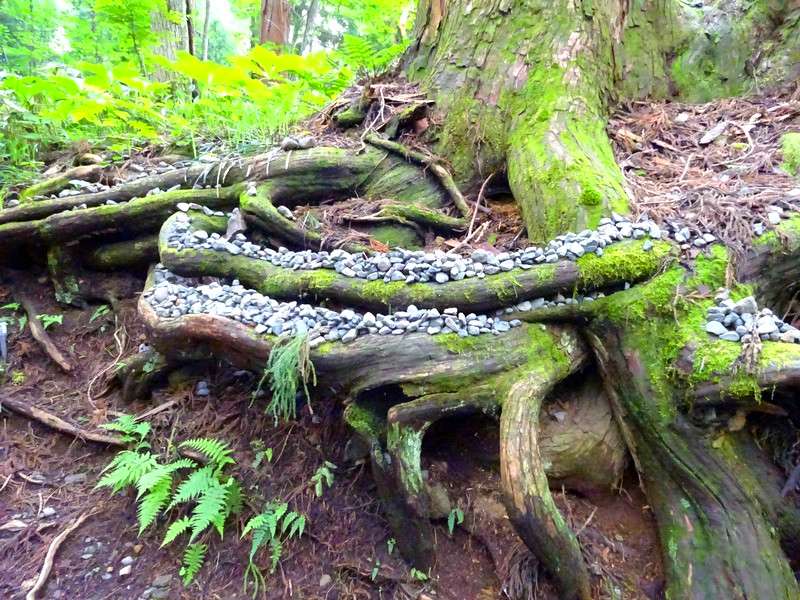 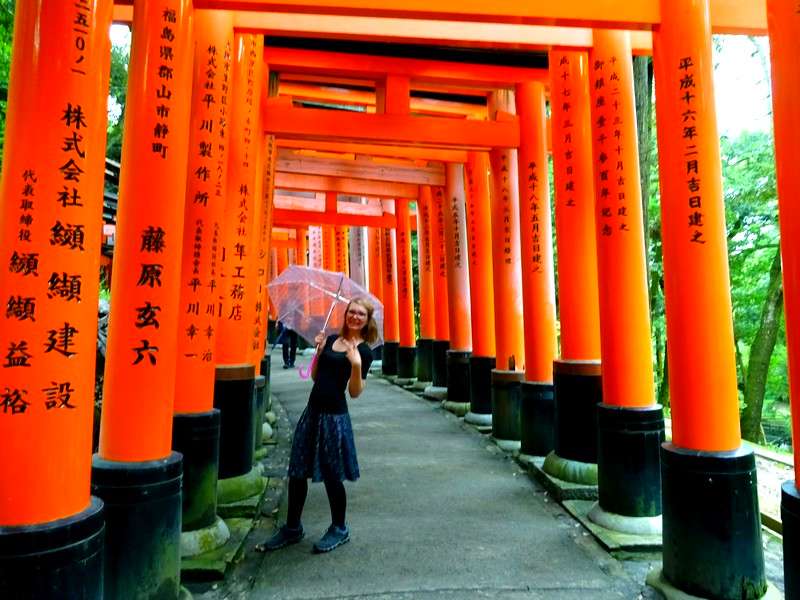 The Kyoto’s Fushimi Inari Taisha Shrine is without any doubt one of the most famous shrines in the entire world. It’s praising agriculture deities, especially Inari, the kami of cereals, business, and merchants. This explains all the different foxes’ statues here and there in the sanctuary, which are called kitsune, which are kind of Inari’s messengers. They often held keys into their mouth.

This shrine is particularly famous for its thousands of red torii forming a path up to the mountain (called itself Inari), in the forest. The 4km stroll amongst the torii is simply surreal, thanks to the beautiful contrast between the red and the greenery of the forest. I share this moment with Celia and Jaime, whom I met at the hostel, and we walk up until we reach the top of the mountain which is also a nice way to have a wonderful view of Kyoto. 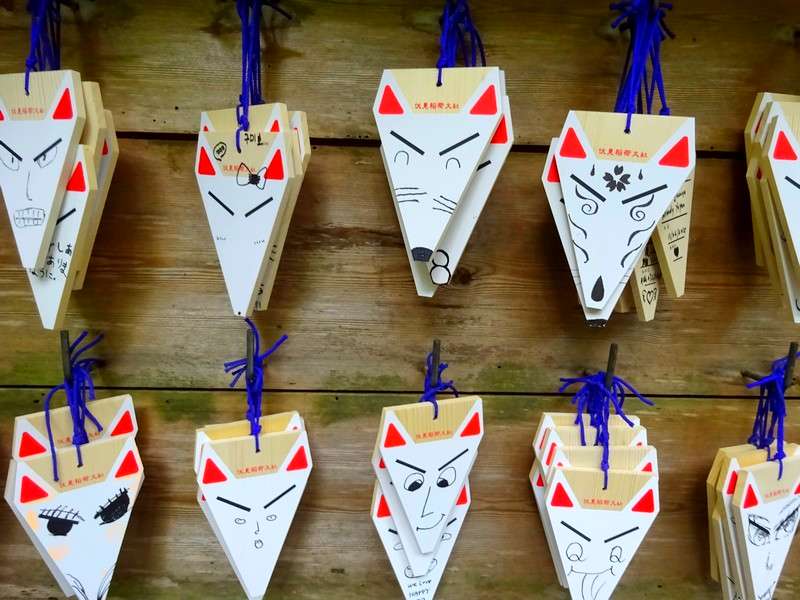 Visiting Buddhist temples or Shinto shrines is surely a part of your adventure while you’re travelling Japan. And the fact that both religions cohabitate peacefully is something worth mentioning. As the adage says “Japanese people are born Shintoists and dies as Buddhists”. And it’s not just a legend, for the Japanese people will worship with the same enthusiasm Buddha or the numerous kami.

I really enjoyed this immersion into the Japanese religions. I liked both elegant architectures and traditional rituals like Omikuji or Ema. Stepping inside a temple in Japan is like taking a deep plunge into Asian culture and all its beauties.