You are here: Take a Walk on the Wild Side > Backpacking for Dummies > HelpX/ Workaway, my volunteering adventures > Celebrating my 29th birthday on Stewart Island
Céline 18 December 201518 November 2020 Backpacking for Dummies, AROUND OCEANIA, HelpX/ Workaway, my volunteering adventures, I think therefore I run away, A WHV in New Zealand 5 Comments

I wake up this morning with another year in my bloody face. The dreaded 29 years. Before leaving for New Zealand, I was bragging here and there that this year I would celebrate my birthday on the beach because it would be summer, that I would go to the movies to see the last Star Wars and that I would have a funky barbecue.

Well. In the end, my birthday was a completely different kind of day. Stewart Island seems to be the only place in New Zealand where there’s no summer and where the Star Wars frenzy can’t reach for there’s no movie theatre on the island…

Two days before, I worked a full day at the Smoked Salmon Factory so I could have my birthday day free and go to Ulva Island. Brenna and Isobel did the same to share this little journey with me.

For breakfast, I have a nice surprise, there’s a gift for me on the table! The helper’s team, Gary and Helen teamed up to buy me a fancy patchouli, orange and almond milk soap. The ideal gift for a backpacker, because we always need soap to keep ourselves clean!

We have to take the ferry at Golden Bay, on the other side of Oban, and that’s when it starts to rain… Lucky for us it doesn’t last long. At the ferry wharf, a lady dressed as Mrs Trelawney (Harry Potter’s divination teacher –yes I’m reading again the Harry Potter saga at the moment!) gives us our tickets. Leaves. Literally. That’s Puheretaiko leaves and we’ll learn later on that they were also used as postcards. Peter, the ferryboat skipper, is really kind with us and the crossing to Ulva Island last about 10 minutes.

Ulva Island is the largest island located off Stewart Island. It’s part of the Rakiura National Park (which includes also the major part of Stewart Island and the surroundings). It’s managed by the DOC (Department of Conservation) and is considered as a sanctuary for a wide range of New Zealand endemic plants and birds. Rats, possums and other pests were eradicated here so the birds and plants could thrive as it was the case before the settlement of Europeans in the XVIIth Century. This island is protected since 1899, for the preservation of the flora and fauna, which makes it one of the first protected place in New Zealand. 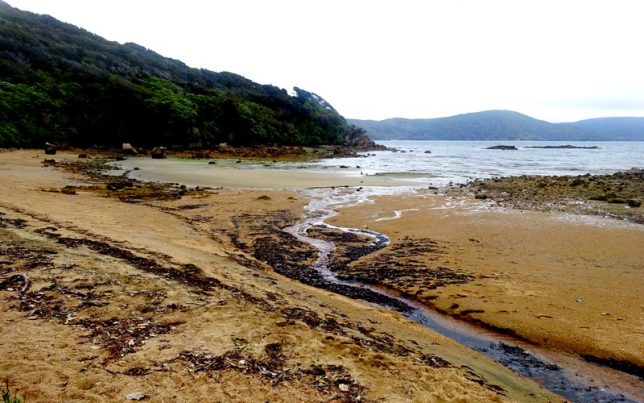 Long story short, strolling on Ulva Island is diving into the past of New Zealand, into what the country was before any European set up a foot there. It’s wild and chirping from everywhere. You can find  Weka, Robin, Bellbird, Silvereye, Yellowhead, Tomtit, Kaka, Saddleback, Oystercatcher, Parakeet, Fantail, Tui, Kereru there. And that’s only the ones I could see. Some even had the chance to see Kiwi in the daylight!

It’s very easy to walk all the paths of Ulva Island in less than 3 hours. What we didn’t plan, though, was that we would spend a lot of time stopping, listening, observing, scratching the dirt (so the insects will come out and attract the birds.) Here is the mind blowing bloody enchanted forest. The jungle. Jurassic Park. The forest is dense and the plants seem so… Old. We try to be as quiet as possible to spot the birds on the way.

Most of them are shy, and I will have loads of blurry pictures… Except for the Robins. They are following us and allowed themselves to be cheerfully photographed, most probably interested in all the insects we’re disturbing with our hiking shoes.

Once we get home again, I have a gift for myself. I bought in a charity shop in Oamaru some cookie cutters (2$ for 5 cookie cutters, that’s a pretty good deal!) because I wanted to bake… Bredeles! Bredeles are a kind of traditional Christmas cookies from my region, Alsace, and at the Christmas period, everyone is baking, buying, and eating those. The sweet smell of cinnamon is all over the kitchen, it smells like Strasbourg in December. And the other helpers seems to enjoy it a lot.

This journey to Ulva Island almost made me forget about my birthday. And it feels good. Some readers must ask themselves how it is to celebrate your birthday on the other side of the world, so far away from home. And honestly, it’s not really easy. Nowadays we have Facebook and all kind of wonderful technology, but it will never replace a hug, a gift, a cake. However, I’m a lucky girl with amazing people in my life who, not matter the distance, will always surprise me (here’s for you, Cynthia Kaiser and Noriko!)

As my 28th birthday was most probably the worst birthday ever, I have some perspective now. Okay, I’m feeling a bit lonely without my close ones, without decorated streets for Christmas, without a bloody barbecue on the beach, without Star fucking Wars.

But. I’ve just spent my day amazed in the forest, listening to birds, on a little island, at the south of the earth. Probably the southernmost point I would ever be (except if I manage to go wandering in Ushuaïa, Argentina, one of these days.)

Thinking about it makes me smile.

For that’s how Adventure is.

And I can’t wait for the 6 other months that are awaiting me in New Zealand…!

5 thoughts on “Celebrating my 29th birthday on Stewart Island”